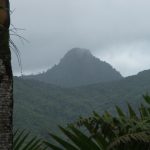 After several Google searches and a few beers we decided on a trip to Puerto Rico to see the iconic Coqui frog. Neither Andy nor I had ever visited the Caribbean before; therefore, we had no preconceived notions of what to expect. We knew there would be beautiful beaches surrounded by sky-blue water and a rainforest, and that was good enough for us.

As the plane touched down in Old San Juan we collected our bags and headed to the rental car counter. We learned a lesson from our recent trip to the South Pacific; pack light and pack everything you need in your backpack/carry-on bag. Our plan was to stay in a hotel the first night but would be camping our way around the mainland and neighboring islands, Culebra and Viequez. Packing everything you need in a single bag that will be carried on your back for two weeks is both frightening and liberating. Nonetheless, our jungle hammocks, clothes, dehydrated food, cookware with utensils, and toiletries managed to fit in the space they were allotted. We headed to the hotel to enjoy the modern amenities before setting off to our first destination spot, El Yunque.

We didn’t have to travel far before making some assumptions regarding the place that would be our home for the next 14 days: 1. I’m not sure car insurance is a “thing” 2. Road signs aren’t used as much as I would like 3. Cockfighting appears to be a National pastime. Regardless, we set off to hike to the Pico El Yunque before setting up camp. The road to the park was quite windy at times. We passed several roadside food stands selling various preparations of beef and fried plantains. Strangely, there seemed to be a lot of hand-painted warnings about the Chupacabra, which I would later learn is a folklore beast that is known for drinking the blood of goats. Interesting how Google left that little tidbit out. 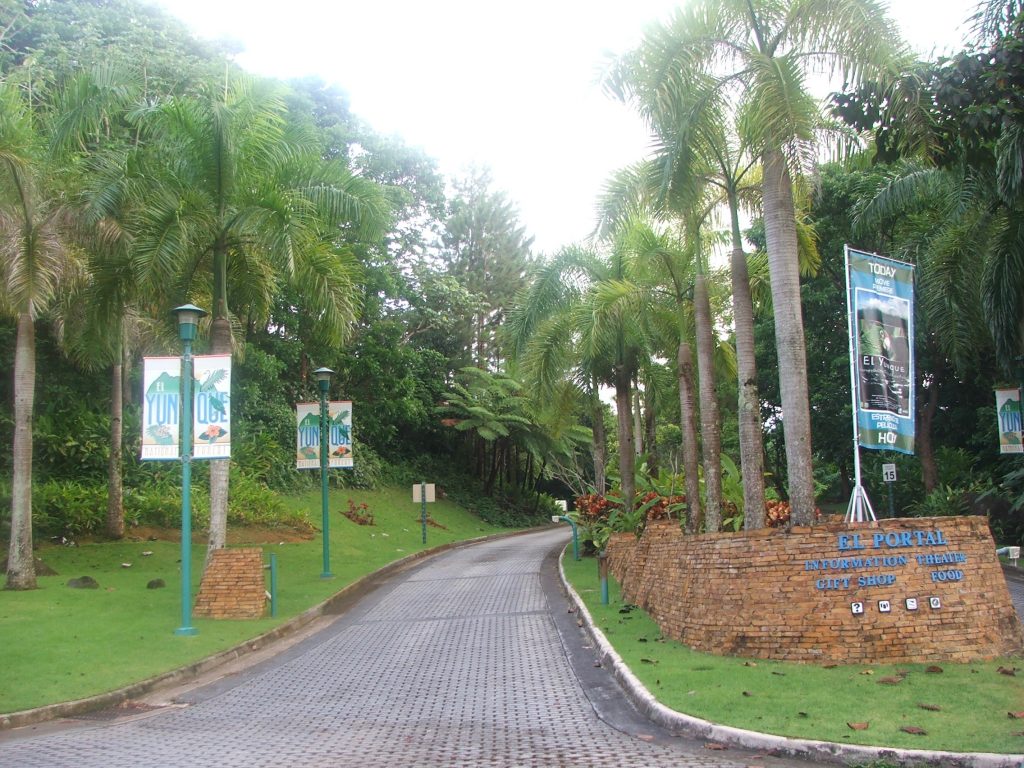 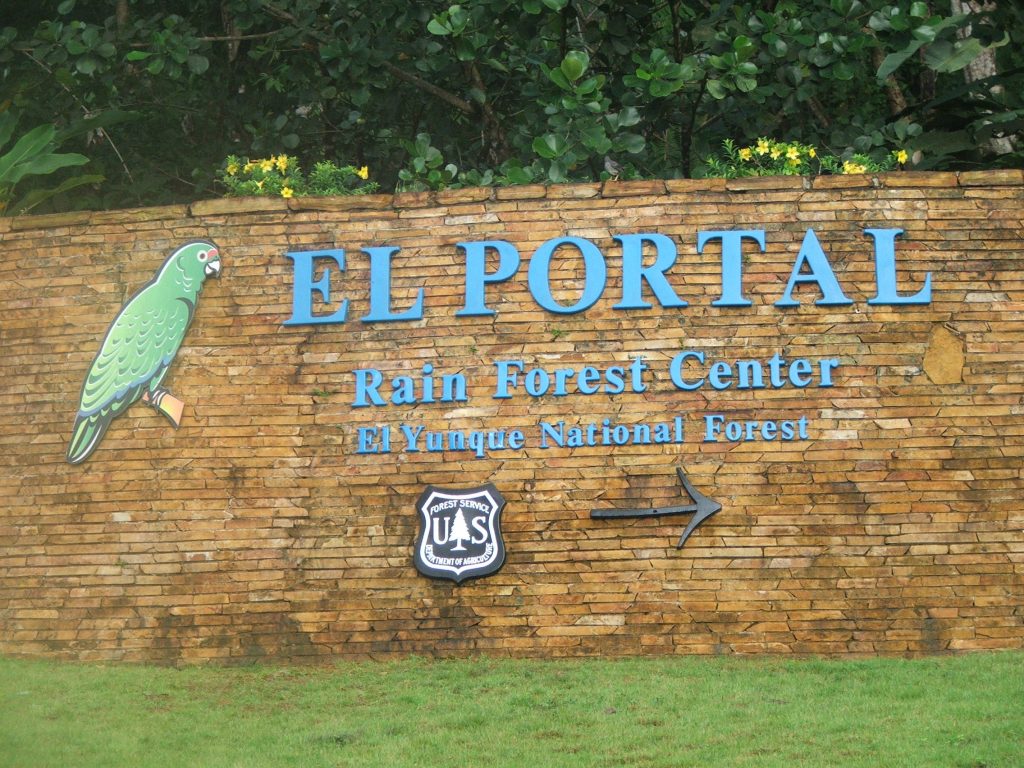 El Yunque National Forest is simply beautiful. Driving through the steel gate past the entrance sign, the forest opens up into giant bamboo stalks, banana trees, and palms; so many colors of flowers that you are immediately over stimulated. The headquarters is a beautiful building that houses a restaurant, gift shop, and office complex that overlooks a breathtaking valley. We signed ourselves in as backpackers before setting off to hike and find a suitable campsite. 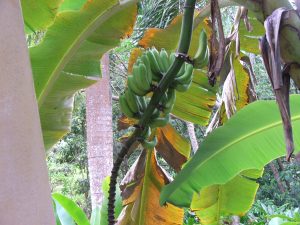 Did you know bananas are considered an herb? 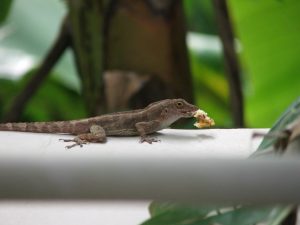 We made a new friend. 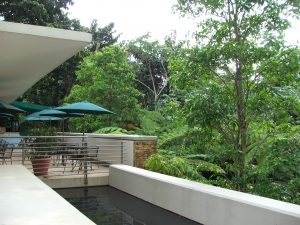 Office with a view. 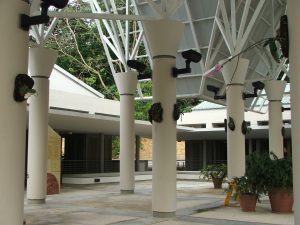 Making your way through the park you pass several popular waterfalls. Clear, light-green water spill out of the mountain and collect in pools. Locals wasted no time enjoying a refreshing dip as the temperature and humidity started to increase very early in the day. We stopped to take the obligatory selfie with the picturesque falls in the background before continuing to our destination. 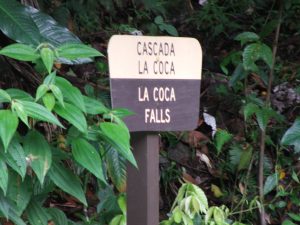 This way to refreshment. 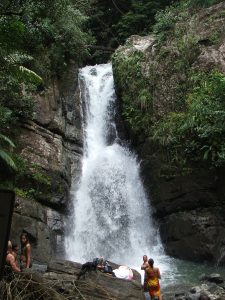 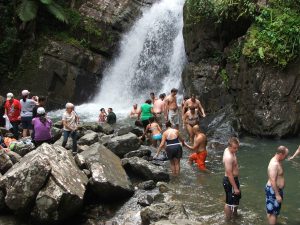 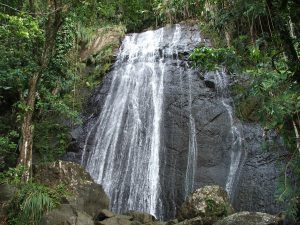 We found a small parking area that would suffice while we made our way up the 1080 m climb to the peak. It was a relief to know that we did not have to take our 50 lb packs with us, just a camera and raingear. Switchbacks made the trail steep at times. There were so many birdcalls that it was hard for the untrained ear to keep track. A variety of insects also joined in the chorus. At times, when the dense vegetation opened up, we could catch glimpses of the valley and mountain peak surrounded in dense fog. The afternoon rains began around 2 pm falling in a complete deluge for a solid hour. It was a bit past 3 pm when the rains finally broke as we reached the summit. We were surprised to see a graffiti-covered brick building sitting in ruin at the top. We documented our achievement for posterity sake before heading back. The fog on the mountain peak was so thick that you could not see any view of the surrounding area. In fact, you could barely see more than 10 feet in front of you. 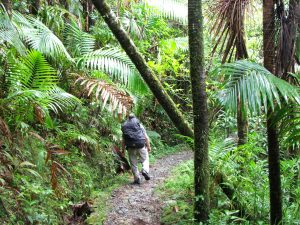 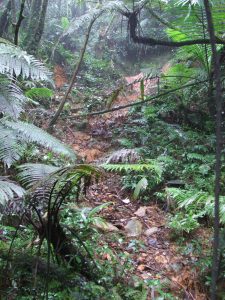 The trail gets more interesting. 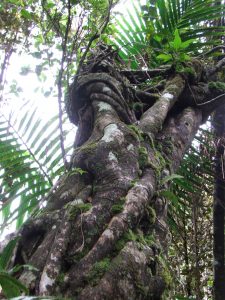 This tree was just begging to be climbed. 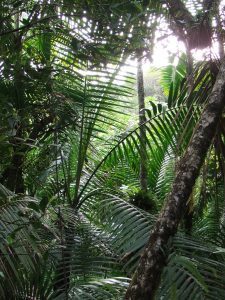 Dense foliage as we make our way to the peak. 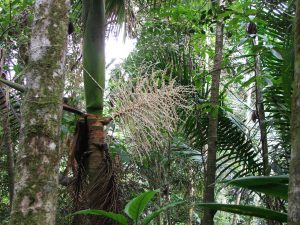 I love rainforests. There is always something interesting to see. 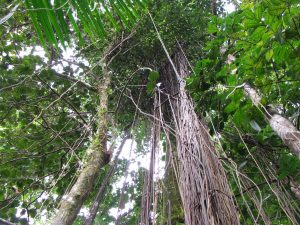 Tarzan would have loved those vines. 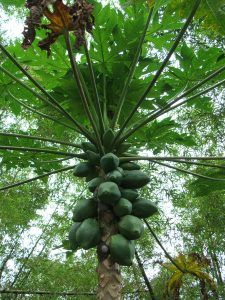 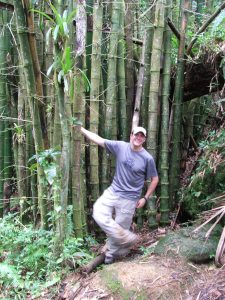 Primate playing on some large bamboo.

As we hiked down we noticed a car park situated much closer to the top than our starting point. Other visitors who didn’t want to enjoy the full experience can begin their trek much closer to the peak. I thought I was a tough cookie when it comes to hiking but women in Puerto Rico take the cake. In attire that I would expect to see at a nice restaurant or nightclub, these women were making the trip in high heels. I struggle with the confines of stilettos on a good day, let alone walking amongst tree roots and rocks. I bent down to whisper a secret “thank you” to my Keen Gortex hikers. 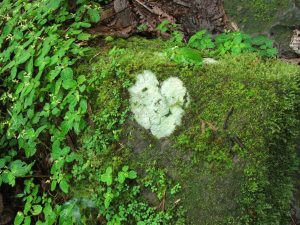 The heart of the mountain. 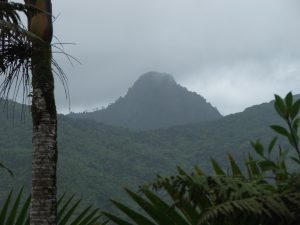 The top of El Yunque. 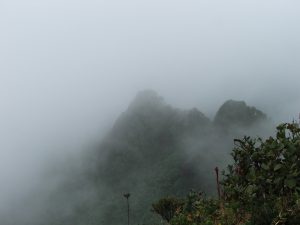 The fog got thicker the closer we got to the peak. 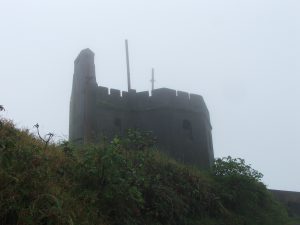 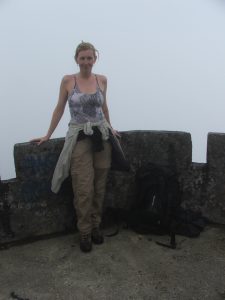 No body said exploration was pretty. Check out that fog! 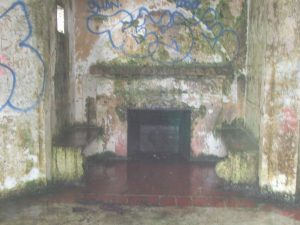 An unfortunate reminder of past visitors.

The rain returned as we made our way back to the car. To preserve the biodiversity of the area, there are specifically designated camping spots throughout the park. Luckily we parked close to a trail that lead to such a place. We only hiked about two miles in a steady downpour before coming to the first appropriate campsite. Andy and I were cold, wet, and hungry. We had decided very quickly that this site would do just fine for the night. As quickly as possible we strung up our jungle hammocks and prepared to make dinner. 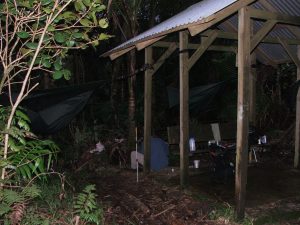 Our home away from home. 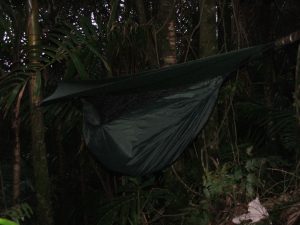 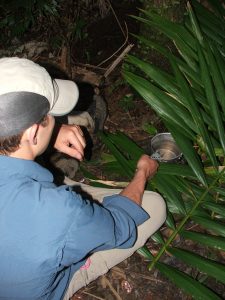 Slow going but persistence paid off in the end.

Normally, when camping in the states, we use a camp stove to heat water used to reconstitute our meals. We can purchase bottles of fuel that quickly attach to the stove then repack neatly in a neat storable pouch. However, since we now live in a post 9-11 world, our camp stove was not welcome on this recent trip. Knowing this ahead of time, Andy spent weeks mastering the art of building a camp stove with his Swiss Army knife using a single aluminum can. By cutting the can into two pieces and nesting one inside the other you could easily allow for a propellant to be housed and ignited all the while allowing air to continually feed the flame. In addition, he had tried out several possible fuel alternatives before settling on 180-proof grain alcohol. Although Andy spent the last month perfecting his design the rainforest had a few tricks up its sleeve. Pounding rain and wind were not our friend while we attempted to boil water. Nonetheless, with some well-placed palm leaves and a lot of persistence we had fire, and more importantly, boiling water. We reconstituted our Pad Thai and meat lasagna before feasting like kings. Or, in our case, we ate like a king and a queen.

The main purpose for our visit to El Yunque was to photograph their Coqui (pronounced Co-Key) frog in its natural environment. The frogs get their name because it sounds like they are saying, “co-key” as they sing. It is quite surprising just how loud these tiny frogs can get as the night goes on; at times the sound is deafening. I had read about these beautiful little amphibians at the ranger station when Andy was checking us into the park. I couldn’t wait to see one. As we settled in to enjoy a nice cup of tea after dinner Andy spotted a frog on a giant palm leaf. I was so excited! He moved closer to the unsuspecting Coqui using his head torch as a spot light while I readied the camera. Suddenly, out of nowhere, a bat swooped down and snatched the poor creature from its perch. The bat struck with such ferocity that it shredded the frond. The Coqui was in mid-song when it had met its untimely end. Andy and I just stared at one another for what seemed like several minutes. Probably not in the best interest of the Coqui to point out there hiding places with a spot light. Word apparently travels fast in the rainforest. Although we heard hundreds if not thousands singing throughout the night, we never caught even the slightest glimpse of another.

It was now around 9 pm; we were both extremely tired. During times of absolute exhaustion one’s mind can begin playing tricks on them. It had stopped raining long enough for us to change into some warm, dry clothes. At this point we had crawled into our hammocks, safely surrounded by mosquito netting. We had said our good nights and were preparing to fall deep asleep. For me, this was the time when I began thinking of the Chupacabre. Yes, you read that correctly, the Chupacabre. Did it really exist? Did it roam this forest? Did it like the blood of other species, or was it’s refined palate attracted only to the Capra genus? The wind started to blow causing the leaves to stir on the ground. Was that something creeping under my hammock? What would I do if it pounced on me? What if it got Andy first? Where did he put the car keys? How was I going to outrun this beast? This is how the token couple always dies at the beginning of B-rated horror movies. Maybe I could climb a tree. What if it could climb a tree? I had worked myself up into such frenzy that I had no other choice by to yell Andy’s name waking him suddenly. Through tears and panic I explained my concerns. He kindly told me there was nothing to worry about. He simply was NOT listening. Had he not seen the warning signs? Again I explained why I didn’t think it was a good idea to be in the middle of the rainforest in hammocks with a savage monster, or so the story goes, on the loose. This time, more sternly, Andy strongly suggested I should go to sleep. I wasn’t having it. I started to sob very loudly for my best friend and Golden Retriever, Marley (named after Bob Marley). If she were here she would save me. As I began to struggle to unzip my hammock Andy simply said, “Tina, lay the f$@k down and go to sleep.” In all of our years together the only time Andy calls me by my first name is when his patience for my antics has ran out. As I lay in my hammock preparing for the worst, I fell asleep.

Early morning bird songs were our alarm clock. The sun was just beginning to peer through the canopy. Andy inquired about any attack that may have occurred during the night. I confirmed that although the mosquitos had a field day on my left ass cheek, there were no other attacks to speak of. As we were finishing our breakfast rehydrated eggs and coffee I asked kindly that the previous evenings concerns were kept between the two of us. After all, I was exhausted and suffering from separation anxiety from Marley. Andy just smiled at me. In the time since, he has only ever spoke about it once.