The international demand for bushmeat is thriving.  By definition, bushmeat is any wild animal that is killed for 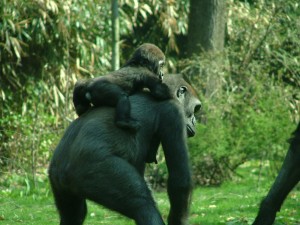 human consumption.   The wild animals are usually protected species, i.e., primates, reptiles, elephants, hoof stock, pangolins, etc., that are obtained from protected areas illegally via snares, poison, and unregistered guns.  Although bushmeat is taken at times to feed starving families living in impoverished areas, it is more times than not sold illegally on the black market.

First and foremost, bushmeat threatens wildlife.  In most cases bushmeat and destruction of habitat occur simultaneously.  In African countries with ongoing mining and oil exploration and logging, previously unaccessible tracks of forest are being exposed allowing for exploitation of wildlife and wild areas.  In addition, by direct contact to wildlife humans risk exposure to a number of zoonotic diseases like HIV-like viruses http://www.thegrio.com/health/diseased-bushmeat-exposes-us-consumers-to-hiv-like-virus.php and the deadly Ebola virus http://www.irinnews.org/Report.aspx?ReportId=41941 Moreover, animal parts not consumed for dinner, i.e., ivory, rhino horn, pangolin scales, bone, and skin, add fuel to the already volatile illegal wildlife trade.  Estimates in the 2008 International Illegal Trade in Wildlife: Threats andU.S. Policy report (http://fpc.state.gov/documents/organization/110404.pdf ), illegal wildlife trade, including bushmeat, nets ~$5 billion annually worldwide with upper limits close to $20 billion.  If these numbers are true, this put the illegal trade in wildlife just third behind drugs and weapons.

As reported by PRI The World on 27 December 2010, a lack of regulation and funding continue to be a determining factor where most bushmeat trade occurs.  The focus of PRI’s story was Cameroon, a place of extremely diverse ecosystems.  Bushmeat is illegally bought and sold openly in markets.  There are laws prohibiting these types of vendors, however there appears to be little to no regulation or actually enforcement.  When funding for anti-poaching campaigns is available, there is a visible decrease of illegal activities.  Funding allows for local communities to be educated on the endangerment to wildlife and habitat, disease contraction, as well as promotes alternative livelihoods.  But local people are not the problem.  Once again, as mentioned previously, industries such as logging, mining, and palm oil plantations supply food for workers by poaching.

Certainly, bushmeat is a problem for all wildlife and their habitat.  Bushmeat, like all wildlife parts, should be avoided at all costs.  Support and education to local communities in wild areas is a start, but is still a far cry from putting an end to this horrific practice.  To find out what you can do, please visit The Bushmeat Crisis Task Force at http://www.bushmeat.org/