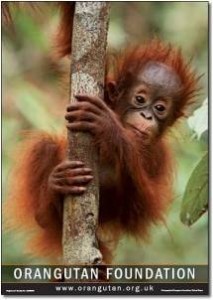 Although I have been aware of the palm oil crisis between palm plantations and wildlife in Indonesia and Malaysia for some time now, I was not aware of how complex and confusing the situation has become.  When was the last time you checked around your home, pantry, bathroom, under the kitchen sink, for products containing palm or palm kernel oil?  I was shocked to find out that a huge variety of things we consume on a regular basis: taco shells, cookies, lotions, dish washing detergent (Palmolive), tooth paste, shampoo, crackers, cereal, bread, and chocolate to name a few, all contain palm oil.  As a stanch conservationist who educates others, recycles, reuses, fights for wildlife conservation and habitat preservation I was appalled at how I could blindly be contributing to deforestation of rain forest in Indonesia and habitat destruction.  I had to get educated!

In general, the palm and palm kernel oil business is huge.  In 2009, Indonesia topped the world producers of palm oil by supplying 20.9 million tonnes to customers all over the globe.  Malaysia, a close second, produced 17.7 million tonnes of product on 4,500,000 hectares (17,400 sq mi) of land, employing ~55,000 people in the process.  Palm oil is not only used for cooking and as a food preservative, but is commonly used as biofuel.  Several countries in Africa, including Benin, Ghana and Kenya, produce palm oil, although production is mainly for cooking.  Palm oil production in Kenya is the second largest commodity behind petroleum to be exported, $140 million to the United States in 2009.  The largest consumers of palm oil are India and China.

Conservationists are concerned about palm oil production because of the deforestation that has occurred to give rise to palm plantations.  The cutting down of trees and draining of wetlands has lead to loss of habitat for some of the most endangered species on the planet including the orangutan and Sumatran tiger.  In addition, the decrease in habitat has increased conflicts between wildlife and humans, allowing for an increase in poaching.  http://www.dailymail.co.uk/news/article-1335367/Starving-orangutans-forced-villages-look-food-rainforest-destroyed.html

A business group, the Roundtable on Sustainable Palm Oil, has been established to ensure that palm plantations are worked as sustainable agricultural areas, and act to protect species and their habitat in surrounding areas.  Likewise, the American Palm Oil Council claims, “Moreover, the expansion of plantations has only utilized lands formerly used to grow rubber, cocoa or coconut, rather than forest land.”   In addition, the Malaysian Palm Oil Board pride themselves on ” the implementation of good agricultural practices…”  My questions to all is are these groups actually on the ground in these production areas?  How are they monitoring what is going on at these palm plantation sites?  Where is the updated information on the websites, and in the annual documents of these groups, showing that habitat is not destroyed and wildlife is not in danger?

Native peoples are also at risk from palm oil farming.  Borneo tribesman from the Iban tribe in Sarawak have been charged with attempted murder after “attacking” men associated with palm oil plantations in the region.  The Iban people claim that the palm oil companies  have encroached on ancestral land, which was taken illegally, and have since be deforested to be used to grow palm trees.  People from the Penan tribe are facing a similar situation.  What are the palm oil groups of Malaysia and the United States doing to ensure that the indigenous people of these areas are not being taken advantage of?

After looking on what seemed to be hundreds of labels at grocers and in my own home of products that contain palm oil, not once did I see documentation that the oil came from a sustainable source.  It is hard to make an educated decision about what to buy or what to leave on the shelf without the whole story.  I would assume that if organic almond butter at Whole Foods contains palm oil that it comes from a “safe” source.  That no tribes were displaced, no animals harmed, or no habitat destroyed so that I could have nourishment.  But how do I know for sure?  It’s a risk that I am not willing to take.

I ask that you educate yourself on this issue.  With the internet now in almost every office and household, we have the ability to see for ourselves how are choices alter the lives of others around the world.  I encourage everyone to visit Google Earth or Google maps and see with your own eyes the current state of the land surrounding wildlife habitat http://www.google.com/earth/index.html in those countries with palm oil plantations. I was saddened to see what little forests are left when compared to plantation sites.  Make informed decisions about what we consume.  And above all, pass what you learn on to a friend.