The conflict between humans and wildlife, in this case elephants, is an ongoing problem that continues to increase in intensity every year.  As the human population continues to grow at an alarming rate (US Census, 2009), wildlife is forced to survive in smaller areas.  Corridors that once offered a passage way for wildlife to travel from one habitat to another are now subject to human habitation.   To ensure that there is enough space and food for humans, forests are being cut down and wild areas are turned into villages and crop land.  Therefore, it should come to no surprise that human-elephant conflicts (HEC) are on the rise.  In Sri Lanka alone, HEC claim the lives of 150 elephants and 100 people per annum.  Comparably, a number of countries in Africa are experiencing similar HEC resulting in deaths.  In most cases farmers are monetarily compensated for their loss; however there is no price that can ever make up for the ultimate loss of a life, be it human or elephant (Blanc, et al., 2007; Stephenson, 2007). 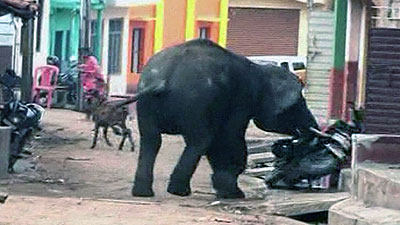 Currently, elephants inhabit 37 range countries in Africa, in addition to primarily mountainous areas in 15 countries within the Indian sub-continent, continental Southeast Asia, and Indonesian Island Nations (Sukumar, 2003).  More times than not, HEC usually happen at night.  Elephants, usually bulls, come into a populated area and wonder into crops.  The unfortunately thing is that in a single feeding, one elephant can destroy an entire annual harvest, and consequently the livelihood of a farmer and his family.  Although bulls account for the majority of crop-raids, breeding herds have also been identified.  Elephants travel the same migratory paths from year to year.  This knowledge is handed down from generation to generation from the matriarch to her family.  When humans move into well established travel routes, building villages and cultivating crops, it is a given that it is not if but when will they have a conflict with an elephant.  Certainly HEC are not restricted to crop raids at night, these interactions can happen any place at anytime with habitat areas (Marchais, 2004).

A great deal of research is currently being conducted regarding nonlethal alternatives in solving HEC.  For habitual crop raiding, it is imperative to keep elephants out of crop lands.  Since elephants can use their size and strength to overcome natural barriers, such as fencing and moats, researchers are investigating things that manipulate elephant’s senses, i.e., sight, sound, and smell.  Elephants are very sensitive to smell and especially do not like the chili pepper.  Farmers have used chili pepper powder mixed with water to coat grass and trees with much success to keep elephants out of crops.  Additionally, crops of chili peppers have been planted as barrier crops around other grains or vegetables as protection.  Loud noises and light flashes have also been used; however elephants are intelligent and habituate to such occurrences (Hedges, 2006). 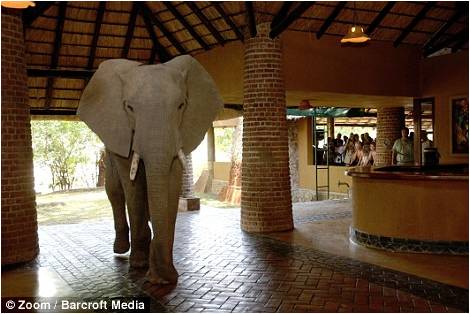