Regardless of species, habitat loss is a death sentence.  It does not matter how successful our captive breeding programs are, or how many people we educate on the plight of an individual animal, without a home range for species to relocate back into, extinction is inevitable.  Habitat 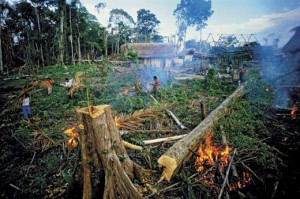 loss is currently happening in every corner of the world, from the wilds of the tropical Indonesia jungles to backyards in the United States.  Whether it direct habitat destruction via deforestation of vital wildlife hotspots like the Amazon (Butler, 2009) or the indirect loss seen as coral reefs are destroyed due to pollution (Allsopp et al., 2007), it ends up a lose-lose situation for all.

Habitat fragmentation and loss continues to be the primary reason for the decline Asian elephant. About 20 percent of the world’s human population lives in or near the present range of the Asian elephant. With human numbers increasing at a rate of approximately three percent per annum in most countries, theoretically there could be a doubling of the human population in 23 years. The elephants’ forest home has been reduced to a fraction of its former range. The World Wildlife Fund (WWF) estimates that there may be only 10 Asian elephant populations of more than 1,000 animals in the 13 countries (Stephenson, 2007).  India’s extensive forests, where elephants roamed widely, now cover less than 20 percent of the country, and barely half of that is suitable habitat for elephants. The central India elephant population has been seriously fragmented. Thailand has cleared almost all its lowland forest, creating a huge void of wildlife habitat in the heart of the country. On the Indonesian island of Sumatra, vast areas of forest are being cleared to accommodate millions of people resettled from the crowded islands of Java, Bali, and Madura. Indo-China’s forests were seriously damaged during 30 years of constant warfare. More forest land, however, has been 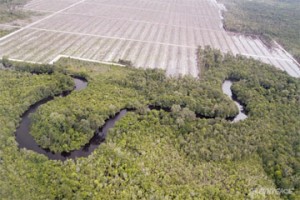 cleared since the Vietnam War ended than during it. In Sri Lanka, the vast Mahaweli River Valley Project for settlement, crops, and irrigation cuts a wide swath through the heart of elephant country. Myanmar (formally Burma), Cambodia, and Laos still have considerable forest cover, but this is suffering from unmanaged and unsustainable logging (Hedges, 2006).

Although the biggest threat to African elephants is poaching for ivory, this is a direct result of habitat loss.  Elephants are safest within the boundaries of National parks under the watchful eye of Park Rangers.  Unfortunately, protected areas are getting smaller and smaller due, in part, to human encroachment.  Humans move into areas that are set aside for wildlife and literally force animals into other habitats; the threshold hypothesis (Hoare and du Toit, 1999).  Currently, almost 80% of the African elephant’s habitat is well outside of predesignated safe areas (AfESG, 2009).   Moreover, the loss of habitat leads to more human-elephant interactions as well.

This story of habitat loss is sadly playing out all over the world.  Orangutan populations suffer due to deforestation in Sumatra because of Palm oil plantations (Damon, 2009), last year an entire Gorilla troop lost both their habitat and lives due to charcoal harvesting (Jenkins, 2008), and as I write this the Golden Toad of Costa Rica has recently been listed as extinct due to habitat loss and pollution (IUCN, 2009).  These three are but a few of thousands of species that are threatened due habitat destruction.   Now is the time that we all must be diligent and conscious about 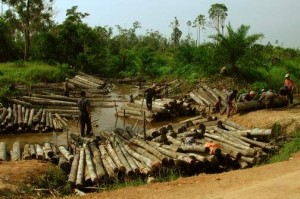 what we do and consume.  Please be aware of what you do and how it affects the rest of the world.  What each and every man, woman, and child can do is educate themselves on what we consume, where the item comes from or how it is harvested, and what they can do to make a difference.  Even the smallest of voices can be heard amongst the crowd.