To the untrained eye, it is very hard to the difference between a male and female elephant.  This is partly because of their unique reproductive anatomy.  Male elephants have internal testes which are located inside the body cavity, situated high on the flank near the kidneys.  Therefore, the usual telltale signs of typical male anatomy, i.e., pendulous testes or bulging scrotum, are absent.  Female elephants are also exceptional in that they have a urogenital opening that is on their abdomen between their rear legs, with mammary glands between their front legs like the primate.  The urogenital track of the female is a common opening for reproduction, parturition, and urination.  Although this anatomical feature causes the urogenital tract to be an incredible 12-15 feet in length, the actual reproductive tract itself is not long at all; located in the stereotypical position like seen in other mammals being supported internally by the pelvic girdle (Hildebrandt et al., 2000a; Hildebrandt et al., 2000b).

Elephants in the wild have been observed to reach puberty between 8-15 years of age.  At that time, males are slowly encouraged by adult cows to become more independent (Dublin, 1983).   It is at this time that the young male is interested in investigating his own home range and slowly but surely leaves his herd behind.  Young males have been seen to travel in bachelor herds with males of similar stature and age.  Within these bachelor groups young males spare with one another and learn important skills that will one day become helpful when they reach a heightened state of sexual excitation called musth.  Musth bulls must be capable of fighting other large musth bulls for the reproductive rights of estrus females, as well as defending those females once courtship and copulation has occurred.  Musth bulls have to be of peak physical condition to ensure that they survive the somewhat grueling month to three month long musth period that occurs annually (Poole and Moss, 1981; Poole, 1987).

For females, puberty is the time when they begin to have consistent estrous cycles.  The estrous cycle is comparable to the menstrual cycle observed in the human; however menstruation (monthly period of bleeding via sloughing of the endometrium) is strictly an occurrence experienced by primates only.   The 16 week estrous cycle of the post pubertal elephant cow is the longest known to date (Hess et al., 1983; Plotka et al., 1988).  When we compare this with domestic cattle, 21 days; sheep, 17 days; and the horse, 21 days, we can begin to see that the female elephant only has 3 to 4 estrous cycles or breeding opportunities per year (Senger, 2002).   A variety of hormones have regulatory roles during the 16 week estrous cycle as seen in figure 1.  Exclusively to the elephant, however, are two peaks of luteinizing hormone (LH) that fall approximately 21 days apart.  In all other species studied to date, only one LH peak is observed, triggering the cascade of biological events that cause.  LH is also responsible for steroid hormone synthesis and regulation of follicular development throughout the cycle.  With the elephant, only the second surge produces ovulation, thus it is referred to as the ovulatory LH surge (ovLH) with the first surge deemed the anovulatory LH surge (anLH) (Kapustin et al., 1996; Brown et al.,1999).  There are several hypotheses as to why the elephant has two LH surges within one estrous cycle.  It has been suggested that the anLH surge initiates a physiological priming effect, allowing other hormonal events to occur that lead to ovulation.  Additionally, it has been thought that this first LH surge could act as a calling card for bulls.  Dr. Bets Rasmussen and colleagues discovered the secretion of a pheromone, (Z)-7-dodecenyl acetate (Z-7-12:Ac), in the urine of Asian elephants at the time of the first LH surge (Rasmussen, 2005).   In the wild, herds and breeding males live separately from each other.   Evolutionarily speaking, it would make since for the females to excrete a chemical signal that is capable of traveling several kilometers to alert bulls to their reproductive status. 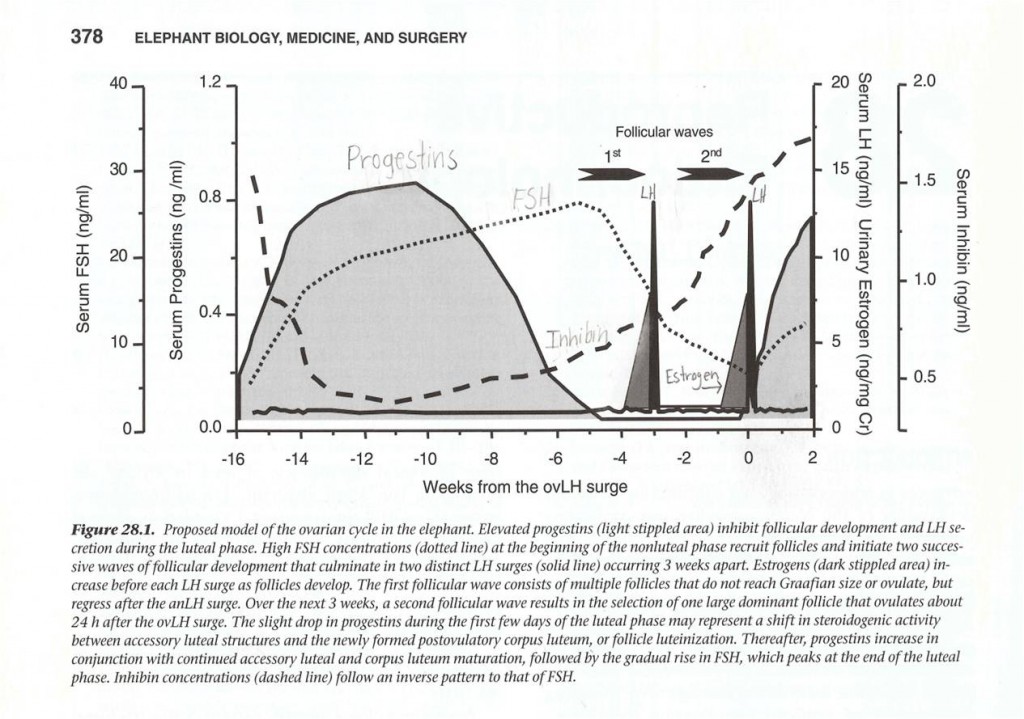 If a successful breeding has occurred the elephant begins the longest gestation known in the animal kingdom, 22 months or just under two years.  Although twinning has been documented in both captive and wild elephants, more times than not only a singlet is born (Schmitt, 2006).  In captivity, pregnancy cannot be detected for at least 4 months.  Keep in mind that the normal estrous cycle is 16 weeks, so it is not until after this time that we are able to detect progesterone (the hormone that maintains pregnancy and is secreted by the corpus luteum, an ovarian gland) continual maintained at a concentration known to support pregnancy (Hodges, 1998)(Figure 2). 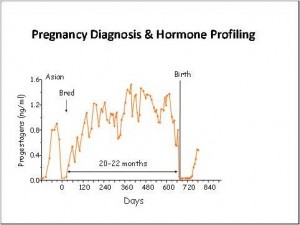 Figure 2 – Pregnancy diagnosis and profiling of progestagens throughout gestation.

Upon parturition the cow will give birth to on average a 180-300 lb calf which she will continue to suckle for up to 3 additional years (Schmitt, 2006).  When taking both gestation and lactation into consideration, we can now see that the elephant is unique wherein she has a calving interval of 3-5 years (Moss and Poole, 1983).  Having such a long time period in between births makes it very difficult for a species to sustain numbers if poaching or habitat destruction should happen to increase in wild populations. 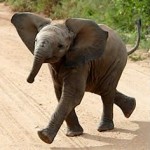