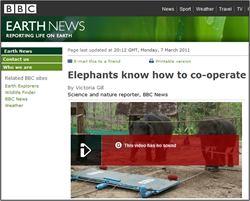 In the test, two animals had to work together – each pulling on a rope in order to tug a platform towards them.

Elephants’ apparent grasp of the need to co-operate shows, scientists say, that they belong in an “elite group” of intelligent, socially complex animals.

Researchers from the University of Cambridge built the apparatus, which was originally designed for chimps.

The team published their findings in Proceedings of the National Academy of Sciences.  Researchers have documented elephants in the wild helping each other

Study leader Dr Joshua Plotnik from the University of Cambridge said it was exciting to find a way to study elephant behaviour in such detail.

“It’s so hard to work with elephants because of their size,” he said.

“We see them doing amazing things in the wild, but we can see from this that they’re definitely co-operating.”

The Asian elephants (Elephas maximus) involved in the study had already been taught that pulling on a rope brought a platform towards them, and a food reward on that platform within reach.

But this apparatus, set up at the Thai Elephant Conservation Center in Lampang province, presented them with a new twist on that simple task.

One rope was threaded all the way around a platform – like a belt through belt loops – so if one end was tugged, the rope simply slipped out and the platform did not budge.

But if two elephants each took an end of the rope and pulled, the platform moved and that could claim their treats.

“When we released one elephant before the other, they quickly learned to wait for their partner before they pulled the rope,” Dr Plotnik told BBC News.

“They learnt that rule [to wait for the other elephant to arrive] quicker than chimps doing the same task.

And one elephant – the youngest in the study – quickly learned that it did not have to do any pulling to get a treat.

“She could just put her foot on the rope, so her partner had to do all the work,” said Dr Plotnik.

Many scientists, photographers and film-makers have documented remarkable behaviour by wild elephants, including “targeted helping” of other elephants that become stuck in mud.

There have even been reports of elephants appearing to mourn their dead.

“As humans, we like to show that we’re unique,” said Dr Plotnik, “but we’re repeatedly shot down.

“One thing that remains is our language. But amazingly complex behaviours – culture, tool use, social interaction – we see all of this in the animal kingdom.”

Dr Karen McComb from the University of Sussex, who studies animal behaviour, agreed that the study enhanced “our understanding of the cognitive abilities of this intensely social animal”.

Dr Plotnik also hopes that his findings will help with the conservation of these endangered animals.

“The more we can understand about their intelligence, the better we can develop solutions to things like human-elephant conflict,” he explained.

“So when the animals are raiding crops, we need to think of solutions that are based on the reasons why, and that benefit elephants as well as people.”

Tina Dow from US-based Elephant Research International said the findings could also “have positive effects on captive elephants, allowing keepers and mahouts to develop better enrichment tools that can stimulate both mental and physical health”.