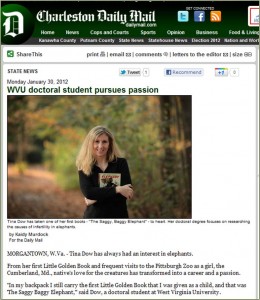 For the Charleston Daily Mail

MORGANTOWN, W.Va. — Tina Dow has always had an interest in elephants.

From her first Little Golden Book and frequent visits to the Pittsburgh Zoo as a girl, the Cumberland, Md., native’s love for the creatures has transformed into a career and a passion.

“In my backpack I still carry the first Little Golden Book that I was given as a child, and that was ‘The Saggy Baggy Elephant,'” said Dow, a doctoral student at West Virginia University.

“I keep that around with me all the time. I didn’t go anywhere without this book,” she said. “When I find that book, I pull it out and I go, ‘Yeah. This is why.’ This love of elephants. I can’t explain it. This is what keeps me going.”

After graduating from WVU with a bachelor’s degree in animal and nutritional sciences in 2002, Dow still wasn’t sure what she wanted to do.

“I interned with several zoos and became a licensed wildlife rehabilitator,” she said.  “But I didn’t have any direction of what I wanted to do. I wasn’t sure if I wanted to go to vet school, but I knew I wanted to continue to work with animals. I just didn’t know how.”

She began taking classes at the University of Connecticut and took an internship at the Roger Williams Zoo in Providence, R.I.  After rotating through several different areas of the zoo, Dow discovered the elephants.

She knew she was in the right place when the elephants seemed to greet her.

“I fell in love with the elephants and the zoo’s research department and thought that if I could somehow marry the two, I’d be in heaven,” Dow said.

Her admiration began to grow as she saw how clever and kind the animals could be.

“When we think of species close to us, we think of great apes or non-human primates, and we don’t really expect elephants to exhibit behaviors similar to humans, but they do,” she explained.

“They are very intelligent, very caring individuals that have a very complex family group, and it’s amazing to watch them interact.”

You might expect her to venture to an exotic location to work with these large mammals.

But no.  All she had to do was return to WVU.

She went back to Morgantown in 2006 to earn a master’s degree in reproductive physiology.  After receiving her second degree, she immediately pursued a doctoral degree to research the causes of infertility in elephants.

Robert Dailey, Dow’s mentor and advisor at WVU and a professor of animal and nutritional sciences, encouraged her to follow her passion.

“There were 250 students vying to interview with her,” Dow said. “When I arrived, she said I had about 40 minutes, but three hours later we were still talking about elephants.”

That led to her conducting some research with Brown, an amazing opportunity for Dow.

“She’s an amazing reproductive physiologist whose research interests don’t exclusively revolve around elephants,” Dow said.  “I’m very fortunate to be able to study with her.”

Research shows that in the wild, elephants have complex matriarchal family units consisting of mothers, sisters, juvenile males and even aunts and cousins.

As the females grow, they become caretakers for the calves. They learn to work cooperatively and tend the young, so when they have their first baby they are prepared to care for it.

In captivity, however, many of the female elephants were brought to zoos as babies and didn’t learn familial ranks or calf care. Many captive babies end up being rejected or killed by their mothers, something that never happens in the wild, simply because the mothers don’t understand what to do.  Because of this, artificial insemination has become a popular alternative to natural reproduction.

Dow and Brown’s research focuses on such problems to find ways to increase reproductive success. Her goal is to maintain a self-sustaining captive elephant population.

With the help of several grants through Equi-tox and Pfizer, Dow and Brown have been observing the effects of medications on the reproductive cycles of elephants.

Although the results of the trials look promising, Dow and Brown wish they could do more.

“That got me thinking about where my life might lead me after graduate school. I’d like to stay within a zoological facility and be able to do field and captive research, but I won’t always be working with elephants.”

As a means to do so, Dow and her husband created an organization called Wildlife Research and Conservation.

“We’re gearing up to becoming a 501(c)3 designated nonprofit organization so I’ll always have a place to do my elephant research,” she said.

“One of the main things we’ll be focusing on is human-elephant conflict in the wild.  It’s an area of research that doesn’t follow reproductive physiology, but it’s also vitally important to preservation of these animals.”

Dow is passionate about a career based on elephants.

“To be studying the creature that I love the most for my Ph.D. project, I am truly the luckiest girl in the world.”