In 1932, film director, W.S. Van Dyke, and crew descended upon the Silver River in Central Florida to film a Hollywood blockbuster. Tarzan the Ape Man would do just that, making more than $2.5 million worldwide. In comparison to today’s film industry, that would be a hit! 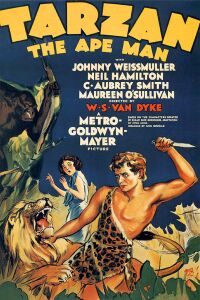 Capitalizing on the film’s success, local tour boat operator, Colonel Tooey, devised a plan to purchase several exotic species including Rhesus macaques to keep near the banks of the river. He would offer a five-mile “Jungle Cruise” from the river’s mouth up to the headwaters of Silver Springs. His idea was to place six macaques on an island two miles upstream to add to the exotic appeal. There was however a small problem, monkeys can swim. And it wasn’t too long before Tooey’s primate performers make a break for it.

A high flow, first magnitude spring, Silver Springs pumps in excess of 550 million gallons of fresh water a day, making it one of the largest artesian formations in the world. The water flow creates the Silver River, a 5.4-mile waterway that becomes incorporated into the Ocklawaha River and eventually part of the St. Johns River system. Although swimming is no longer allowed in the headsprings, Silver Springs remains a popular tourist destination spot to gaze into the mesmerizing crystal clear blue-green water. 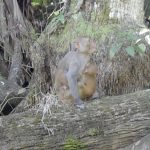 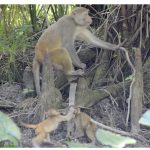 Toddlers playing near the water. 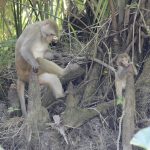 An adult is never too far away. 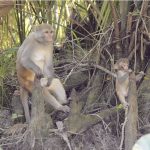 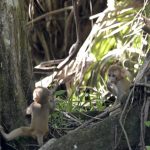 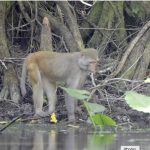 Native to South, Central, and SE Asia, Rhesus macaques can be found inhabiting grasslands, woodlands, and mountains reaching heights of 8000 ft. Interestingly, within their native home range, these primates are well adapted to human presence and can most often be found near urban areas. Troop size can range from 20-200 individuals, with females outnumbering males 4:1. Subgroups and hierarchies for males and females are found within a troop. Central subgroups show co-dominance whereas peripheral subgroups answer to a single dominant male. 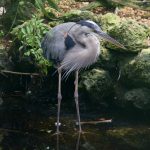 Heron hunting for breakfast along the shore 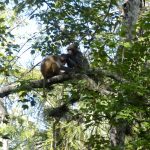 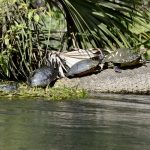 Turtles sunning themselves on a felled tree. 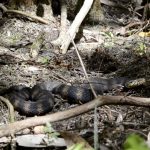 My first visit to the Silver River and Silver Springs was nothing short of magical. Since then, it has become one of my most favorite places in the world. Kayaking up the 5.4-mile river certainly lets you get up close and personal with the incredible wild inhabitants. Not to mention, the variety of tropical plants instantly transports you to someplace exotic. It certainly did not feel like I was still in Central Florida. The riverbanks are lined with wading birds hunting for breakfast. Alligators of all ages hide amongst the lily pads and tree roots, with the occasional brave individual swimming along while you paddle. Turtles and snakes sun themselves on felled trees. Oh, and did I mention there are monkeys? 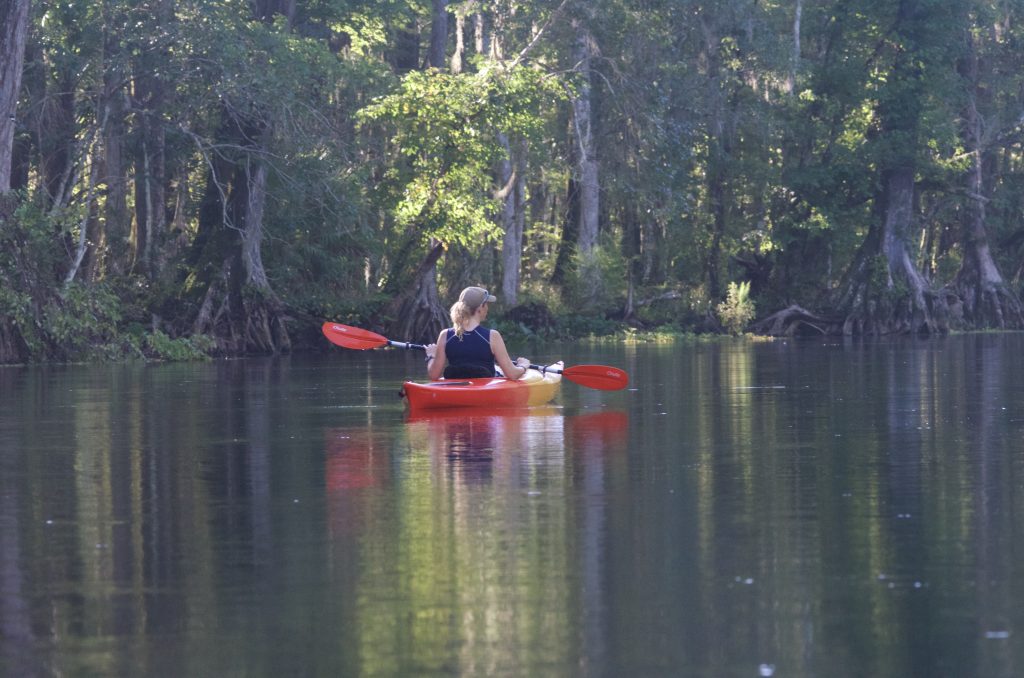 On each of my trips to the Silver River I have been able to observe the macaques. Sitting silently in my kayak has allowed me the privilege of watching members of the troop wake-up from their overnight slumber and forage along the bank. It has always been in the same place and time of the morning. Just as the sun spills it’s golden rays into the water, the monkeys are on the move. Tiny infants cling to their mothers. Toddlers roll and play with one another dangerously close to the waters edge. Adults keep the peace, dealing out verbal warning to youngsters that stray. You usually hear the crashing of palm fronds before you see the first macaque. At times, vocalizations become frantic, as if they are trying to talk over each other. Then, as suddenly as they appear, all is quiet and they have moved along up river.

Being a conservationist, I am interested in how the macaques have carved out a niche in a place so far away from their home range. In other areas of the world with introduced or feral species, local flora and fauna suffer. Either they have to change their diet or inhabited area due to depletion of resources or fall prey to the uninvited guest. This particular troop of monkeys has continued to thrive for more than 80 years since their introduction. 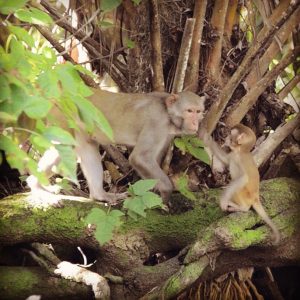 In 2012, Anthropologists from San Diego State University set out to determine the population size of the troop and effects of human interaction on diet. Surprisingly, data showed that 88% of the macaque’s main diet was leaves, buds, shoots, and the dried samara fruit. In addition, other researchers have observed members of the troop supplementing their diet with spiders and bird eggs. Over just a few generations, they have found their ecological place in the environment. Furthermore, biologists have suggested that the primates themselves add to the food chain by being a food source for alligators, owls, bobcats, and foxes. Despite having more than 700 individuals trapped and transported to biomedical facilities between 1998 and 2012, there are approximately 112 individuals that currently call the river home.

Although the presence of the Silver River macaques appears to be benign to other species that share their habitat, there is a significant health risk to humans. Many are thought to carry the Herpes B virus: the only nonhuman primate herpes virus that is severely pathogenic in humans. Once infected, Herpes B presents clinically as a severe central nervous system disease resulting in permanent neurological damage. There is an 80% mortality rate in untreated patients. Exposure can occur through scratches and bites or contact from biological materials to mucous membranes. To date, there has been no documented case of Herpes B transmission from these animals to humans.

Every time I journey up the Silver River I am amazed by the diversity of flora and fauna, native or not. It is incredibly difficult for me to imagine that this hidden paradise is in my backyard. As I quietly paddle during the moments before dawn, I am reminded that, if given the opportunity, life finds a way. Whether the presence of the macaque troop continues to be a non-hindering addition to the river ecosystem remains to be seen. For now, I enjoy being transported back in time, where Tarzan swings through the treetops looking for Jane.