Pakistan is blessed with several natural beauties including indigenous wildlife (including several rare endangered species), beautiful mountains of Himalayas, deserts of Cholistan and Thar, Manmade forests like changa manga forest as well as several natural resources from the Baluchistan trails. It also holds second tallest mountain K-2, which is a really challenging tourist attraction in terms of mountain climbing. Four seasons bloom each year to their fullest, and rain fall of 12-14 inch per year average lead to make Pakistan a very fertile agricultural land.

But despite its enormous beauty, Pakistan has many pests which are ruining it by illegal hunting, poaching and unattended wildlife disease impact (i.e. Newcastle disease in wild peacock). Deforestation and lack of biodiversity conservation laws are eradicating Pakistan’s biodiversity at a massive scale.

In 2012, National Assembly Standing Committee on Climate Change was distressed to know that bustards and the Siberian cranes are hunted arbitrarily. Both these species of migratory birds flying into Pakistan all the way from Siberia during the winter months are listed in the Convention on International Trade in Endangered Species (Cities) with around 14,000 other endangered species in Pakistan including birds, other animals and plants.

The meeting channeled their thoughts to find out the source of such illegal hunting and came to an awkward result that members of Royal families from the Middle East, particularly from Saudi Arabia, have been given licenses to hunt endangered migratory birds, such as Bustards, despite the stringent restrictions. The meeting observed that it was the Foreign Office that issued hunting licenses to such personalities.

Laws are there to stop such hunting campaigns, but often the officials who control such events become lawless in greed of money. Such laws are also present to stop poaching of wildlife specially endangered species. In August 2012, a group of young individuals were arrested in Bahawalpur accused of illegal hunting and poaching of wild animals. The district administration officials said they have recovered four deer, 28 black and 11 brown partridges and 20 quails from them. The officials held that three of those arrested are government servants. These deer and other animals were captured from Laal Sohanra National Park, which hosts as many as 432 deer in the 600-acre area.

In some areas and National Parks of Pakistan Game hunting is being practiced successfully to control and fulfill the hunter’s desire of hunting and to finance the conservation efforts for those animals. For the trophy hunting of Kashmir markhor, as the program began, three hunters from US paid as much as $150,000 per trophy – for every markhor hunted, $105,000 was returned to the community for a total of $315,000. Slowly but surely, the markhor population began to recover. Last year too at least 48 permits have been issued on exorbitant fees to legally hunt wild goats. The impact of such projects over the country has shown its results in years. In 1986, there were less than 200 Suleiman markhors and Afghan urials in their natural habitats in Baluchistan, but a 2010 survey showed their populations had increased to 3,500 and 3,000, respectively.

Beside all the pleasures of game hunting there is another side of the picture as well, some shepherds who have lost their cattle

that are being hunted by wild carnivores often kill such attackers to reduce the attacks. In 2011, a snow leopard wrecked havoc in a remote valley of Gilgit one night, killing 68 goats in six separate incidents. As a result after few months there was several news of snow leopard being killed by locals as a protection measure. Such boundaries are not being controlled here. Human interrupts the wild lands in terms of recreational activities and the results turn fatal for both.  (Photos courtesy: www.wildlifeofpakistan.com)

recent years by BBC, which was shot in chitral and gilgit sites. Nisar Malik, a Pakistani journalist, and cameraman Mark Smith (who had worked on the Planet Earth segment) spent a further 18 months filming snow leopards in the Hindu Kush for the BBC film Snow Leopard – Beyond the Myth


Such beauty of Pakistan has to be conserved at any cost. But all efforts go in vane without a proper check and balance on it. Beside hunting and poaching, lack of proper disease control is also a major problem for wildlife and biodiversity in Pakistan. A recent study by sub-continent’s eminent scientists revealed that Newcastle disease which is caused by avian paramyxovirus serotype-1 (APMV-1), that is also branded as Newcastle disease virus (NDV). It is a highly contagious viral disease that affects domesticated and wild bird species throughout the world. The disease is endemic in Pakistan and represents major threat to the economy of the country. From 2009 to mid 2012, many outbreaks of Newcastle disease have been reported to World Organization for Animal Health from Pakistan as well as neighboring countries. Most of the outbreaks have been reported from Iran and India that shares border with Pakistan. Even with some of the reports from selective regions only and surfacing of novel NDV (5i) from Pakistan, it is of the essence to screen and characterize the NDV throughout the country (Muhammad U Sohail et al-2013).

Last year, in 2012, Pakistan lost 300 peacocks to the deadly Newcastle virus. This year, since June, at least 60 more peacocks have died owing to the same disease, five of which died in a span of just two days. The overall population at risk is around 80000 which threatened of extinction from Pakistan if proper control measures are not practiced soon. Around 40 million chickens have died due to this massive attack of ND virus.

Several conservation campaigns are working at national and international level by governmental as well as nongovernmental organizations for controlling of hunting, eradication of poaching, enhancing the breeding of wild animals, tagging and vaccination of wild animals. 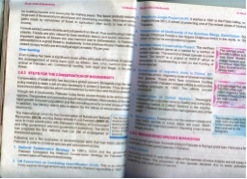 With all this I urge the readers to contribute their energies to conserve the essence of natural beauty of Pakistan taking one step at a time.