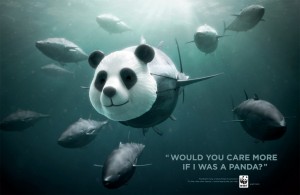 8 June marks the 7th official (23rd unofficial) World Oceans Day celebration. Now more than ever our oceans need our help. The choices we make in our everyday lives have a huge impact for the ocean ecosystems and their inhabitants. From the food we eat to the body wash we use in the shower, making good decisions about the products we use can make a significant difference between a healthy ocean and stories of what we once had.

Overfishing continues to be one of the largest threats to our marine life. It is estimated that 90% of large predatory fish like Bluefin tuna, sharks, grouper, Chilean Sea bass, Orange roughy, and cod are gone. When we consider that more than 1 billion people rely on fish as a key source of daily protein, severely declining fish stock will inevitably affect human health. 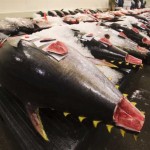 The demand for seafood is at an all time high. Annually, 170 billion tons of wild fish and shellfish are caught legally. Illegally, fish numbers are hard to estimate; however, monetarily speaking, it is a $10-24 billion dollar industry. Too many boats paired with destructive and irresponsible fishing methods are causing ecological dead zones. Mother Nature does a wonderful job at maintaining balance within the ocean’s ecosystems. All species have an important role to play to promote healthy seas. When the predators are removed, the prey flourishes. As time goes by, jellyfish move into the habitat and slime eventually takes over.

Despite warnings by well-respected marine biologists, the fishing industry trudges on to feed the demand. Past failures regarding fishery collapse seem to be forgotten, doomed to repeat once again. In 1992, the Northern Cod Fishery in Newfoundland Canada refused to head caution of a total collapse in their local fish industry. Local cod was fished to extinction, never to return. As a result 40,000 people were left unemployed causing the economy to plummet. 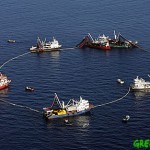 At present, only 1.6% of our oceans are declared protected. Within 98.4% of our oceans, illegal and legal fisherman alike can do as they please to our most precious aquatic environment. As we have witnessed with terrestrial wildlife, poor management and a lack of protection will surely spell the end for some of most iconic species. Without fish we will also inevitably lose both their predators and prey. Toothed and Baleen whales as well as marine mammals will suffer directly or indirectly via starvation.

It is not just those targeted species that suffer due to overfishing, but also innocent bystanders. By-catch refers to all of those unintentionally caught animals that find themselves in a net or on the end of a hook. Nets and hooks can be active or inactive, set adrift in the oceans gyra. Regardless, most by-catch have already died as a result of the entanglement/catch by the time they have been found. Their bodies, if released at all, are tossed carelessly back into the sea.

Whether we recognize it or not, humans have the power to save our planet. It is our choices as consumers that ultimately determine what lives and dies. Take the time to educate yourself on those vulnerable, overfished species that should be taken off of the menu. Seafood Watch (www.seafoodwatch.org) has an online Sustainable Seafood guide and smartphone app to help the public make smart choices regarding the seafood we eat. How goes the ocean goes the planet. As Dr. Sylvia Earle would say, “No blue, no green.” 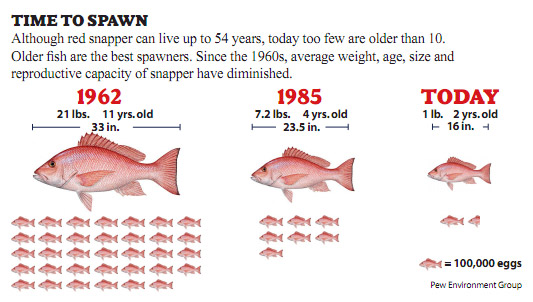