Growing up as a kid in the Northeastern United States I was enthralled by the night sky; watching hundreds of bats hunt winged insects with deadly precision.  As if it happened only yesterday, I can still remember the sound of the tiny chirps and pips of the bats as they communicated to each other and located prey.  Sadly, in my adult years, to see a single bat is a rarity; the night sky is now empty and silent.

Since the initial discovery in 2006 in a single cave in New York, White-nose Syndrome (WNS), or Geomyces 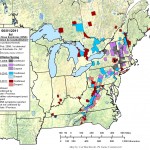 destructans, has been the cause of death of more than one million bats.  White-nose Syndrome is a condition caused by a cold-loving fungus that is commonly found in Europe.  Although it is not clear how the fungus got into the United States, it is suspected that cavers visiting international caves may have unsuspectingly introduced fungal spores from boots and clothes into US caves.  To date, nine bat species in 19 states have now been infected.  According to the New York Department of Environmental Conservation, WNS has killed 98% of the bat populations in New York, Massachusetts, and Vermont. 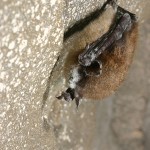 Infection of WNS causes bats to become active in mid-winter and leave their hibernacula in search of food.  Infected bats will be active in both the day and night time; extremely uncharacteristic for a nocturnal insectivore.  The increase in activity causes bats to burn fat stores; without a food source to replenish what is lost the bat literally starves to death.  In addition, bats found with WNS have a characteristic white dusting of fungal hyphae around their nose and mouth, and a degeneration of skin on their wing membrane.  Wildlife pathologist Carol Meteyer explains that the fungus does not directly invade the blood of the infected bat.  The fungus begins to  grow on the surface of the skin in all directions.  As the fungus multiplies it releases a biologically active enzyme that initiates the digestion, or eroding, of the skin on which it grows.  Bats commonly share roosting areas with hundreds, even thousands, of other bats of the same or different species allowing for bat to bat contact to further spread the disease.

becomes barely negligible in a bid to conserve valuable energy in order to survive.  As the bats immune system becomes depressed, an acute immune reaction i.e., redness and inflammation does not occur in response to WNS.  Once the animal begins to wake from hibernation the immune system becomes functional; however, at this time the WNS has overtaken the individual and the bat has either died or is dying.

So what about infected European bats?  Scientists are actively investigating if European bats have either become resistant to WNS or if the European strain is not as deadly as the American strain.  In addition, veterinarians and pathologists are working to establish a regimen to treat infected bats and a prophylactic to prevent healthy bats from contracting WNS.  Unfortunately, to date, no such treatments have been found.

Biologist with the US Fisheries and Wildlife Service predict that WNS will continue to spread across the United States soon reaching Oregon and Washington.  In a desperate attempt to stop disease transmission, access to caves have been closed.  Cave closures have been met with strong

opposition from the caving community despite the increasing number of bat deaths and areas documented with WNS.  Bat biologists urge cavers to understand the need to isolate the disease and if they must enter caves to do so with clean clothes and boots.  In response, cavers state that to close caves from exploration would be a fate worse than death for them, further stating that they themselves want to conserve caves and their inhabitants.  An interview with a cave enthusiasts in regards to WNS and cave closures can be seen at http://youtu.be/JslEMAhwrWA .  However, I have to ask: if cavers understand that the spreading of WNS is a direct result from individuals within their community carrying deadly fungal spores from cave to cave, why wouldn’t you want to stop cave exploration briefly to allow biologist the time to control the spread of WNS and aid in overall bat survival?

Vilified for decades as carriers of disease and icons of evil, the simple sight of a bat evokes fear in humans all around the world.  However scientists say that it is life without bats that whould be most terrifying.  Bats actually play an important role in controlling insect borne disease; one bat is able to consume almost 1000 mosquitoes in a single hour.   According to Science Magazine, bats contribute ~$22.9 billion annually to the Agricultural Industry via insect control and crop pollination.  How much do we contribute to bats annually?