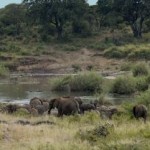 Populations of both elephant species continue to decline in the wild as they live under the constant threat of habitat destruction and deforestation, as well as illegal slaughter for ivory and bushmeat.  As one of the longest lived mammalian species, and certainly the biggest on land, the adult elephant does not have any natural predators except for man.   Because of the elephant’s large size and long calving interval, they are much more at risk of complete eradication.  African elephant numbers plummeted in the late 1970’s to early 1980’s due to ivory poaching; estimates showed that the population fell from 1,341,000 animals to a little over 700,000 in less than 10 years (Douglas Hamilton, 1989).  Unfortunately, the illegal killing of elephants for ivory still remains a grave threat in 2009 for all species (Douglas-Hamilton, 2009).

Loss of habitat is yet another great risk to the survival of the elephant.  As the human population continues to grow at an alarming rate, all animals are forced to survive in smaller habitat areas.  Corridors that once offered a passage way for wildlife to travel from one habitat to another are now subject to human habitation.   To ensure that there is enough space and food for humans, forests are being cut down and wild 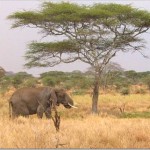 areas are turned into villages and crop land.  Therefore, it should come to no surprise that human-elephant conflicts (HEC) are on the rise.  In Sri Lanka alone, HEC claim the lives of 150 elephants and 100 people per annum.  Comparably, a number of countries in Africa are experiencing similar HEC resulting in deaths.  In most cases farmers are monetarily compensated for their loss; however there is no price that can ever make up for the ultimate loss of a life, be it human or elephant (Blanc, et al., 2007; Stephenson, 2007).

Elephas maximus is currently listed as an endangered species with the United States Fish and Wildlife Service (USFW) and classified under Appendix I with the Convention on International Trade in Endangered Species of Wild Fauna and Flora (CITES).   E. maximus once occurred from the Tigris-Euphrates in western Asia, east through Iran and south of the Himalayas; throughout south and southeast Asia including the islands of Sri Lanka, Sumatra and Borneo, and into mainland China 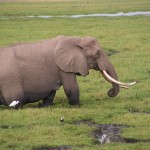 Habitat fragmentation and loss continues to be the primary reason for the decline of E. maximus. About 20 percent of the world’s human population lives in or near the present range of the Asian elephant. With human numbers increasing at a rate of approximately three percent per annum in most countries, theoretically there could be a doubling of the human population in 23 years. The elephants’ forest home has been reduced to a fraction of its former range. The World Wildlife Fund (WWF) estimates that there may be only 10 Asian elephant populations of more than 1,000 animals in the 13 countries (Stephenson, 2007).  India’s extensive forests, where elephants roamed widely, now cover less than 20 percent of the country, and barely half of that is suitable habitat for elephants. The central India elephant population has been seriously fragmented. Thailand has cleared almost all its lowland forest, creating a huge void of wildlife habitat in the heart of the country. On the Indonesian island of Sumatra, vast areas of forest are being cleared to accommodate millions of people 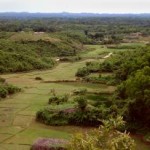 resettled from the crowded islands of Java, Bali, and Madura. Indo-China’s forests were seriously damaged during 30 years of constant warfare. More forest land, however, has been cleared since the Vietnam War ended than during it. In Sri Lanka, the vast Mahaweli River Valley Project for settlement, crops, and irrigation cuts a wide swath through the heart of elephant country. Myanmar (formally Burma), Cambodia, and Laos still have considerable forest cover, but this is suffering from unmanaged and unsustainable logging (Hedges, 2006).