Poaching and the Legalities Behind Elephant Ivory 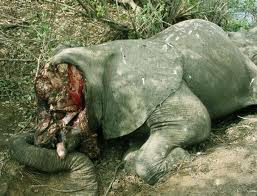 In the mid to late 1970’s the worldwide demand for ivory threatened both the Asian and African elephant with extinction.  The use of automatic weapons obtained from black market sales through arms dealers gave poachers the necessary tools to kill whole herds at a safe distance.  The population of African elephants was decimated, falling from 1.3 million elephants in 1970 to 600,000 by 1985, thus causing them to be classified as an endangered species (Appendix I) according to the Convention on International Trade in Endangered Species of Wildlife Fauna and Flora (CITIES), an international treaty group established in 1973 to regulate trade in certain wildlife species.   In 1989, CITIES held a meeting to discuss what needed to be done to conserve African elephant populations; a total of 115 African countries agreed to place a ban on the international trade of ivory.  Without the threat of heavy poaching, the African elephant began to stage a comeback with current population numbers estimated between 470,000-690,000 (CITES, 1989; Blanc et al., 2007; IUCN, 2009).

Critics of the 1990 ivory ban pointed an accusatory finger to the west.  It was thought that Western media were imposing their morals and values on poor African countries with complete disregard for villages that were competing with elephants for resources and land.  It was debated that although elephant populations in Kenya, Tanzania, and Zambia were threatened with possible extinction, other countries were suffering from a population explosion (BBC, 2000).

Unfortunately, because of the success of African elephant conservation projects, in 1997, CITIES allowed Botswana, Namibia and Zimbabwe to remove the Appendix I (endangered species) classification from their elephants and permitted a one-time sale of existing legal ivory stocks; African elephants in these countries were now listed as an Appendix II species (threatened species).  In 2000, South African would also follow suit (CITIES/WWF, 2004).  At present time it appears that elephants are once again under heavy threat of being poached for their ivory. As reported in a recent article in Scientific American, as many as 38,000 elephants were poached in 2006 alone; a number that closely echoes ivory ghosts from the past (Wasser et al., 2009).   To add insult to injury, on July 15, 2008, CITES once again granted China and Japan permission to

import elephant ivory from stockpiles held in four South African countries in a “one-time” sale.   More than 108 tons of ivory was sold and exported during this time (Gray, 2008).  Some scientists believe that if trade is not prohibited and poaching is not brought under control most populations of elephants could face extinction by 2020 (Douglas-Hamilton, 2009).

The Asian elephant was succumbing to a similar fate in its home ranges of India and countries in Southeast Asia.   Although Asian elephants are less prone to ivory related poaching due to the fact that only male elephants grow tusks, poaching has taken its toll on elephant numbers nonetheless.   It appears that the biggest factor contributing to Asian elephant deaths is habitat loss and deaths from human-elephant conflicts per annum (Blanc, et al., 2007; Stephenson, 2007).  Regardless, poaching still takes the lives of bulls at what may be a rate of hundreds per year, and with an estimated wild population of only 38,000-50,000 elephants, every individual counts (CITES/WWF, 2004; IUCN/SSC, 2009). 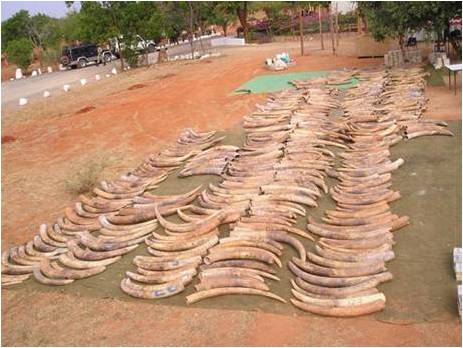 One of many illegal ivory seizures by the Kenyan Wildlife Society.  Picture by: Top News

Additional legislature in the United States has also been set to regulate the illegal import and export of wildlife paraphernalia.   The Endangered Species Act of 1973 provides broad protection for endangered species in the U.S. and worldwide. Under this law, provisions are made for listing species, recovery plans, and critical habitat designation. This piece of legislation is the foundation for the Convention on International Trade in Endangered Species of Wild Fauna and Flora (CITES).  Specifically for elephants, the African Elephant Conservation Act was passed in 1988. This law allows the U.S. government to take strict action against illegal ivory imports and authorizes government funding for elephant field conservation projects. Through the provisions established by this law, elephant ivory imports are banned in the United States. However, it is legal to buy, sell, and transport African elephant ivory purchased before the ban in 1973.  The Asian Elephant Conservation Act was passed in 1997. This law supports and provides financial resources to conservation initiatives within Asian elephants’ geographic distribution (U.S. Fish and Wildlife Service., 2009).