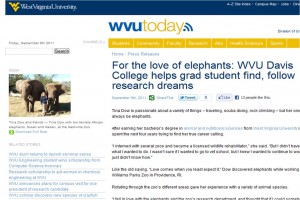 Tina Dow is passionate about a variety of things – traveling, scuba diving, rock climbing – but her one true love will always be elephants.

After earning her bachelor’s degree in animal and nutritional sciences from West Virginia University in 2002, Dow spent the next four years trying to find her true career calling.

“I interned with several zoos and became a licensed wildlife rehabilitator,” she said. “But I didn’t have any direction of what I wanted to do. I wasn’t sure if I wanted to go to vet school, but I knew I wanted to continue to work with animals. I just didn’t know how.”

Like the old saying, “Love comes when you least expect it,” Dow discovered elephants while working at the Roger Williams Parks Zoo in Providence, RI.

Rotating through the zoo’s different areas gave her experience with a variety of animal species.

“I fell in love with the elephants and the zoo’s research department, and thought that if I could somehow marry the two I’d be in heaven,” she said.

Until then, the only thing Dow knew about the creature is it’s the world’s largest land mammal. However, watching them interact showed her how intelligent and compassionate elephants can be.

“When we think of species closest to us, we think of great apes or non-human primates, and we don’t really expect elephants to exhibit behaviors similar to humans, but they do,” Dow explained. “They are very intelligent, very caring individuals that have a very complex family group, and it’s amazing to watch them interact.”

In 2006, with a wealth of knowledge gained through on-the-job training, Dow returned to WVU in pursuit of her master’s degree in reproductive physiology. After completing it, she immediately moved on to her doctoral degree.

She recalls a conversation with her mentor, Robert Dailey, professor of animal and nutritional sciences in the Davis College of Agriculture, Natural Resources and Design, that helped connect her with Janine Brown, an internationally known reproductive physiologist with the Smithsonian National Zoological Park, who shares Dow’s love of elephants.

“Dr. Dailey asked me what research area most interested me,” she said. “When I told him elephants and of the research Dr. Brown was conducting, he said I should contact her.”

Although Dow realized the interview process would be highly competitive, she knew being able to conduct research alongside Brown was a once-in-a-lifetime opportunity.

“There were 250 students vying to interview with her,” Dow said. “When I arrived she said ‘I have about 40 minutes,’ but three hours later we were still talking about elephants.”

To say the pair hit it off would be an understatement.

“She’s an amazing reproductive physiologist whose research interests don’t exclusively revolve around elephants,” Dow said. “I’m very fortunate to be able to study with her.”

In the wild, elephants have a matriarchal society with family groups consisting of mothers, aunts, sisters, cousins and juvenile males. When the males reach puberty between 13-15 years of age, they are encouraged to leave the family group to help prevent inbreeding.

“What’s most interesting about these family groups is that, as the females grow, they take on a babysitting-type role with the calves. They learn how to take care of the young and work cooperatively, so by the time they have their first baby they’ve already properly learned to care for it,” she said.

In captivity, however, many female adult elephants were brought to zoos as babies and never had the opportunity to come up the familial ranks and learn how to interact. As a consequence, learning to care for a baby is not instinctual.

“A lot of captive breeding is now done through artificial insemination because it’s very dangerous to shift elephants around,” she explained. “Unfortunately, we also see a lot of babies that are rejected or killed by mom because she clearly doesn’t understand what she’s supposed to do. That’s something that never happens in the wild.”

Without a self-sustaining captive population – a result of elephants getting older and not reproducing for a multitude of reasons – researchers are exploring avenues to increase reproductive success.

Focusing on captive African female elephants that are more prone to reproductive failure, Dow began by exploring the reasons acyclicity, or having no estrous cycle, occurs so often.

“I looked at all hormone concentrations we would see in a normal cycle because we know what that cycle is supposed to look like,” she said. “We found one hormone in particular that in all of these acyclic females is either really high or low – prolactin. Because it promotes lactation, high levels of prolactin are typically only seen during pregnancy.”

Hyperprolactinemia, or the presence of abnormally-high levels of prolactin in the blood, is one of the primary causes of amenorrhea, or what would be the equivalent to acyclicityin humans.

With the help of several grants through Pfizer and Equi-Tox, Dow has been studying the effects of administering medications that would typically be given to horses or humans to either lower or raise the elephants’ levels of prolactin.

“While we’re only about six months into the trials, the results look very promising,” she said. “We’re seeing elephants respond and what looks to be the initiation of cyclicity again.”

Working with Brown has given Dow the opportunity to potentially help the captive elephant population now and in the future.

“Dr. Brown always says, ‘I wish I had more time. I wish I had more elephant projects,’ because she loves them so much,” Dow said. “That got me thinking about where my life might lead me after graduate school. I’d like to stay within a zoological facility and be able to do field and captive research, but I won’t always be working with elephants.”

In an effort to calm some of the anxiety over the unknown, Dow and her husband founded Wildlife Research and Conservation.

“We’re gearing up to becoming a 501©3 designated non-profit organization so I’ll always have a place to do my elephant research,” she said. “One of the main things we’ll be focusing on is human-elephant conflict in the wild. It’s an area of research that doesn’t follow reproductive physiology, but it’s also vitally important to preservation of these animals.”

And, at the end of the day, Dow believes if she makes life better for just one individual elephant she’s done her job.