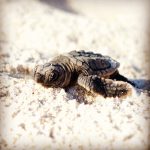 Florida’s Atlantic Coast is currently a hotbed of activity for Sea turtle propagation. From early May to September, several species of Sea turtle seek out the coastline as a prime nesting location. During each season thousands of Loggerhead, Green Sea, and Leatherback turtles make their way to land by the light of the moon to lay their eggs in the warm sand. With any luck, in 50-60 days, the next generation will be on their journey into the deep blue. 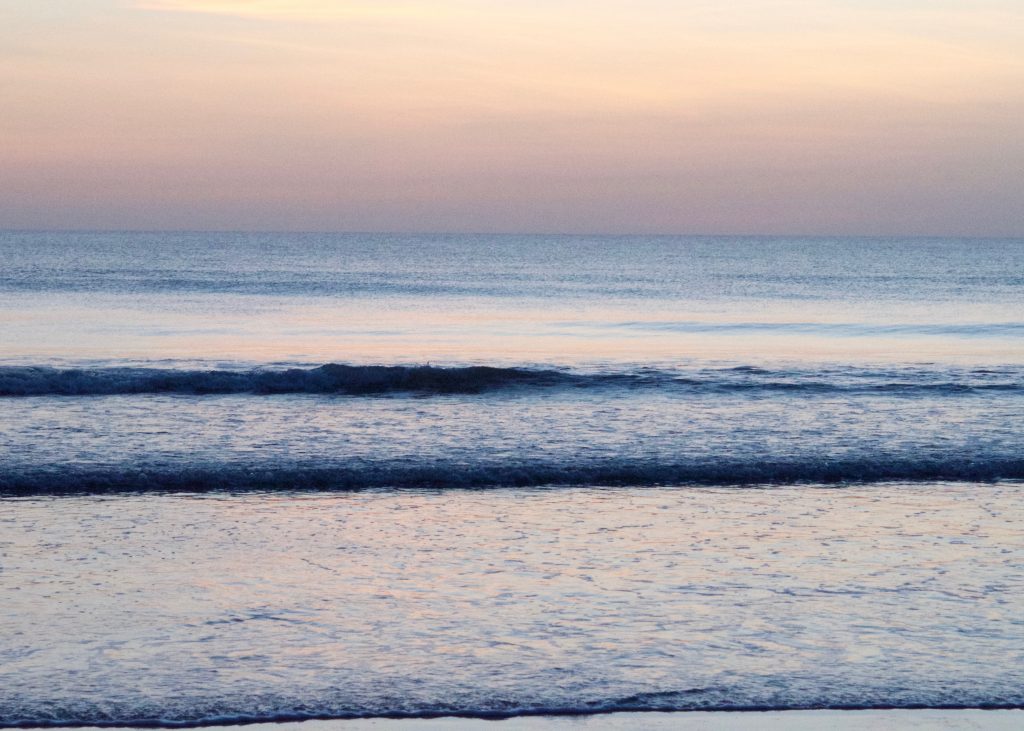 Ancient sea turtles first appeared in the coastal waters of Pangea over 240 million years ago during the late Triassic period. Individuals in the early genus, Archelon were massive, measuring more than four meters flipper to flipper and weighing in at over two tons. Around 110 million years ago a branch point on the phylogenic tree gave modern sea turtles a common ancestor. Of the two genera arose from the genetic crossroads, one of which is extinct and one that still persists to this day. Our modern sea turtles are represented in either the genus Dermochelyidae (Leatherbacks) or genus Chelondiidae (Loggerheads, Kemp’s Ridley, Olive Ridley, Hawksbill, Flatback, and Green Sea). 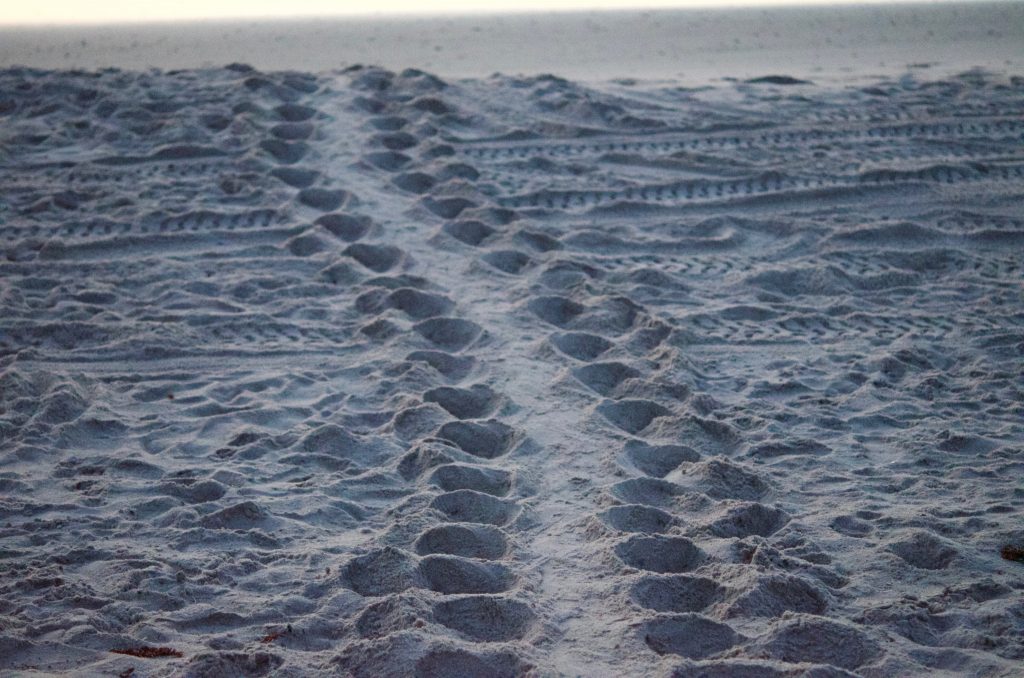 Loggerhead Tracks onto the Beach 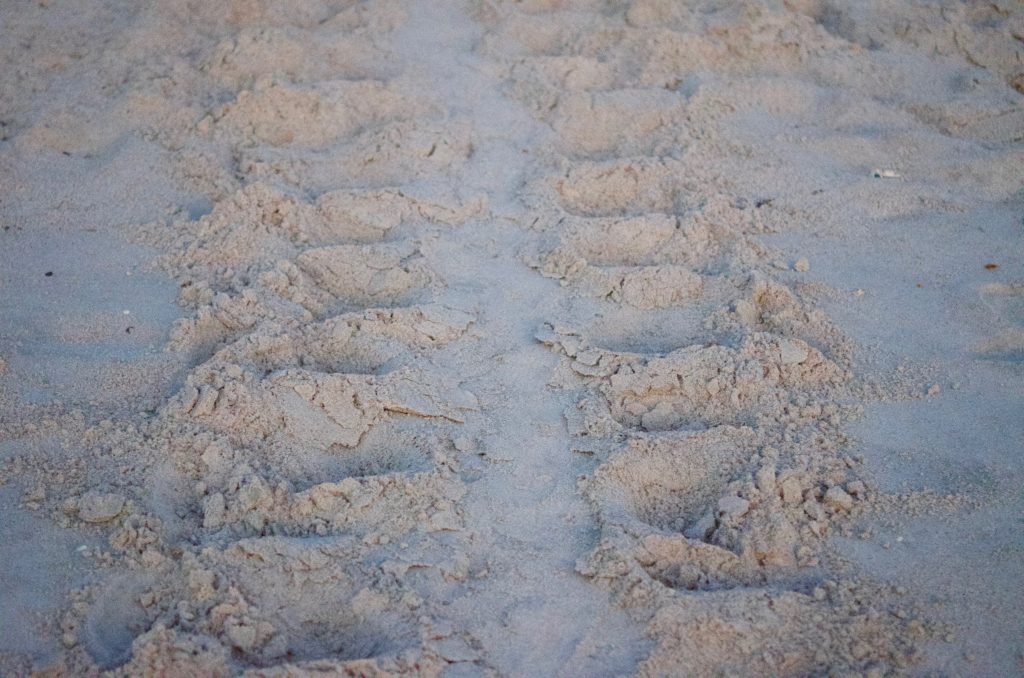 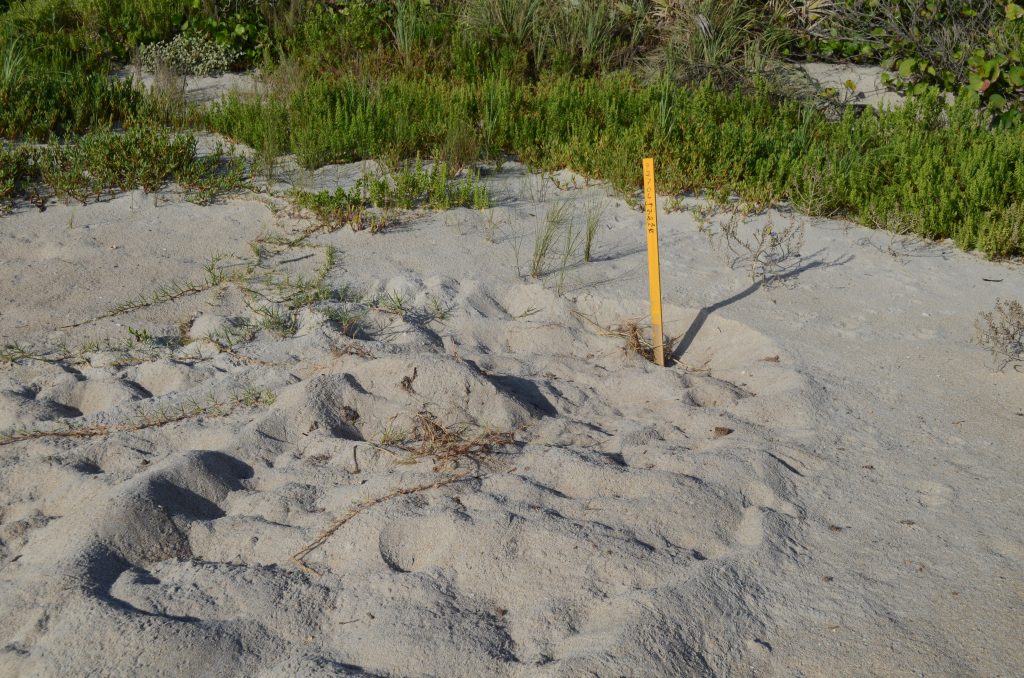 Male or female, to become reproductively successful takes time. Depending on the species, some individuals may reach sexual maturity as young as 15 years of age while others not until their early thirties. Particularly with females, nesting is energetically taxing. Once a female is committed to nesting, she will stop eating and simply focus on the task at hand. As many as three months may go by from the time she leaves her foraging grounds to take the epic migration to the place of their birth. In the surrounding waters of the nesting beach, females will mate and begin the arduous process of coming ashore in two week intervals to lay multiple clutches of eggs. Loggerheads, for example, may lay as many as 5 clutches of eggs at five different nest spots, each may contain 100 + eggs. Each nest is laid ~two weeks after the preceding to allow time for ovarian follicles to develop, ovulate, and become fertilized by sperm that has been stored in the upper portion of the oviduct. The entire event can be physiologically draining, resulting in females loosing up to 25% of their total body weight. Because of this, females do not nest consecutive years. They must travel back to their foraging waters to build up reserves for the next time she participates be it in two or three years.

Once the eggs are laid the female’s work is done. Within the oviduct fertilized eggs only develop to an early embryonic stage called gastrulation. At this point, the growing embryo will enter a state of quiescence, which will remain until the eggs are deposited into nest sites. At this time, each egg resumes development. Unlike mammals, sex of the offspring is determined by internal nest temperature instead of genetics. Since there is a slight variation in temperature within the egg chamber, both males and females are produced. After an approximate two-month wait, hatchlings emerge under the cloak of darkness for the perilous journey to the sea. 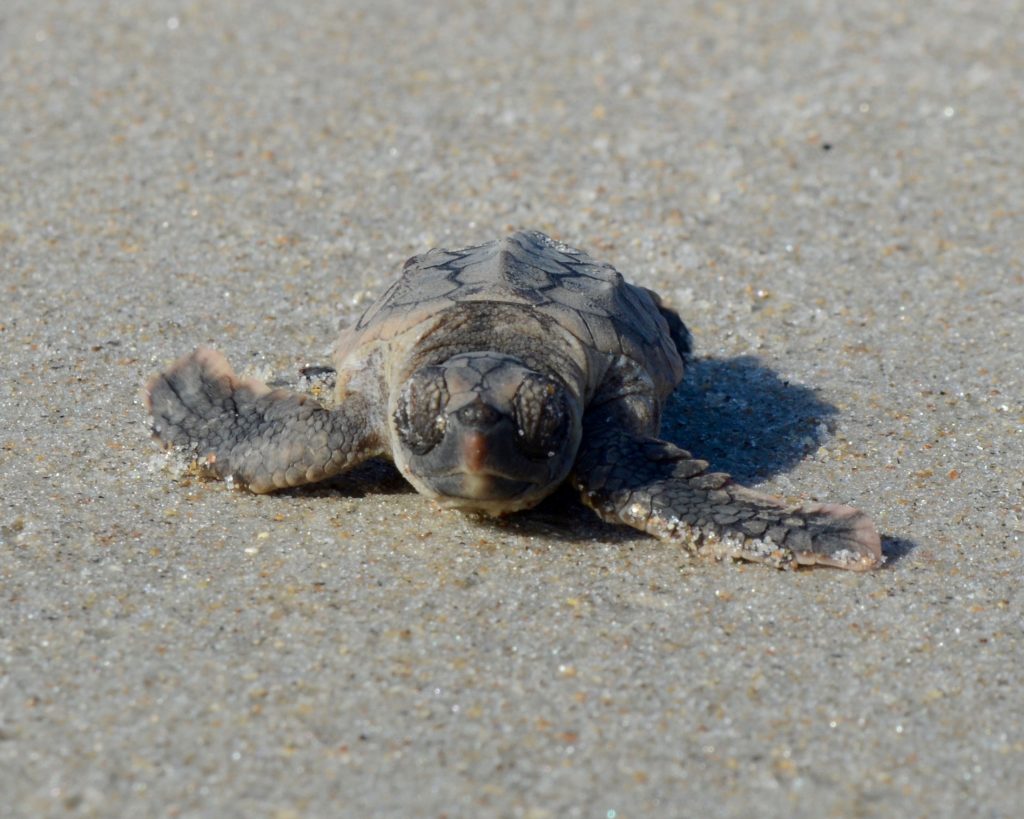 Hatchling on a Mission

At the time of hatching, neonate turtles form a tiny structure at the tip of their beak known as an egg tooth. This tooth allows them to slice through the leathery eggshell, a process known as pipping. After the initial cut, babies can take up to two days to escape the egg. During this critical time, they are also absorbing the remaining yolk sac attached at their umbilicus. Similar to the placenta in mammals, the yolk sac allows for a nutrient reserve needed for growth and development within the egg. Hatchlings will absorb what remains to ensure they have the energy required to make it out of the nest, across the beach, and into the open sea. When the environmental cues are correct, hatchlings finally make their way to the surface. The frenzied movement causes the sand to look like it is boiling with baby sea turtles. Hatchlings make their way to the ocean by finding the brightest point in the dark of night, the horizon line. Once orientated, the dash for survival is on. Unfortunately, there are a lot of predators for sea turtle eggs and hatchlings. It is estimated that only 50% of all eggs in a nest hatch and of that number it is unknown how many of the hatchlings actually make it to the sea. Shore birds, ghost crabs, and raccoons certainly enjoy nesting season to reap their own rewards. Once in the ocean hatchlings swim almost non-stop for the first 24 to 36 hours of their life, eventually making it to the open ocean they will call home for the next 15 to 30 years. 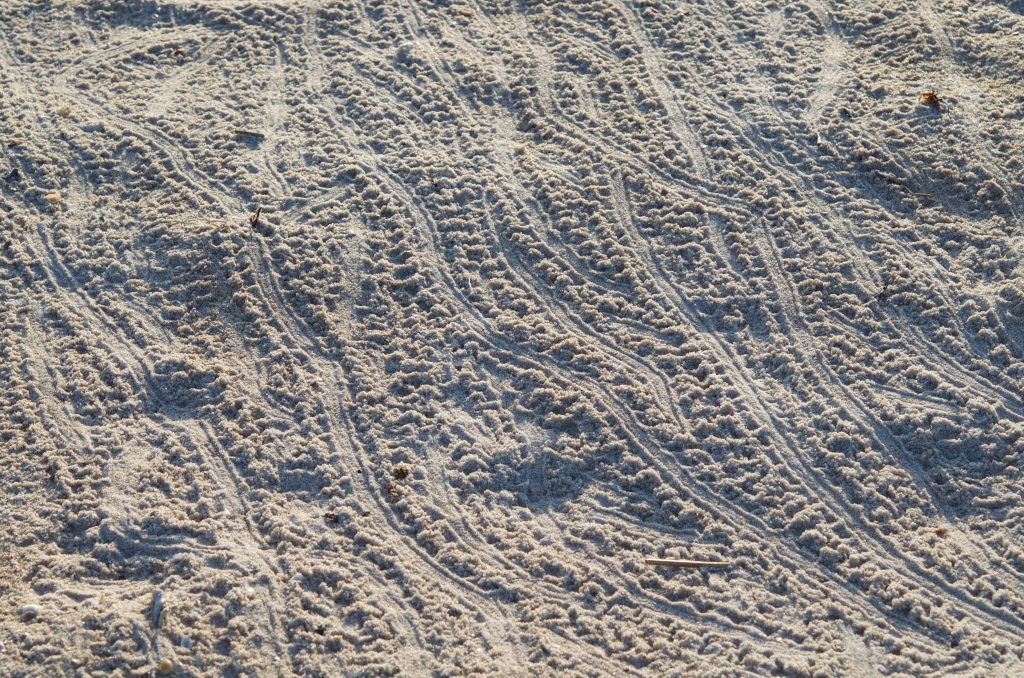 Hatchling Tracks are Evidence of a Successful Journey to the Sea

Sadly, a lot of animals depredate on nests and newly emerged hatchlings. In my few weeks as an observer to this reoccurring phenomenon that is nesting season, I have been met each morning with more raided, destroyed nests than evidence of successful hatchlings. As a conservationist, I am confused by this course of events. On one hand, I believe everything that can be done to protect these nests to maximize hatchling numbers should be done. All means of protection should be utilized throughout the nesting season. However, I cannot help but wonder if this is nature’s way. Tracks of raccoons, shore birds, foxes, bobcats, ghost crabs, and the occasional feral hog liter the beach every morning around the ravaged nest sites. The bodies of dead hatchlings or the remains of shredded eggshells with spilt yolks strewn around. With the exception of the pigs, these opportunistic predators are native to this coastal habitat. So, as devastating as it may be, is this nest depredation natural, in which case should be accepted as part of the natural world? I’m afraid I do not have that answer. I will tell you that, right or wrong, I lean toward the former. 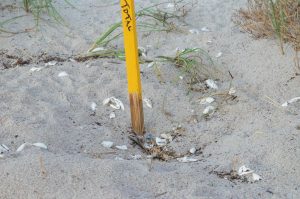 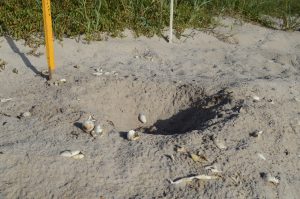 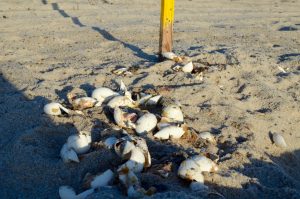 Eggs Destroyed During a Nest Raid 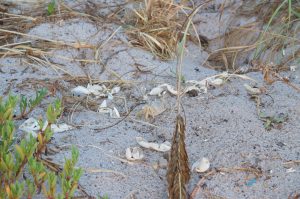 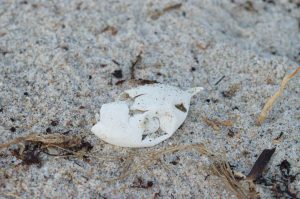 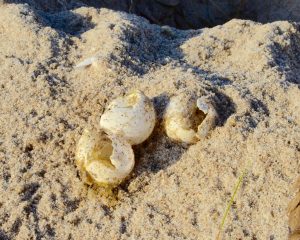 Most Predated Eggs Are Not Even Eaten 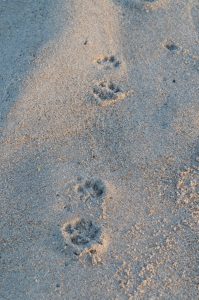 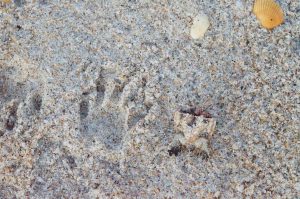 This Raccoon Track Ominously Found by a Half-eaten Hatchling 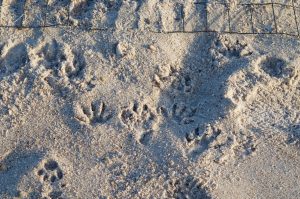 Mixed Tracks at a Nest Site

In general sea turtles are struggling for survival. Aside from the struggle from egg to hatchling, juveniles and adults are failing victim to several man-made issues. As human encroachment into wildlife habitat increases bright night-lights at human dwellings along the coastline can disorientate nesting females. Inappropriately discarded rubbish posses a huge concern as plastic items like bottle caps, balloons, and bags are mistaken for food items. This ingestion can cause sickness and/or strangulation. Poorly discarded fish gear and either actively used or unwanted nets cause entanglement hazards that can maim and kill turtles. In addition, sea turtles are captured for the illegal wildlife trade, as well as killed for their parts. 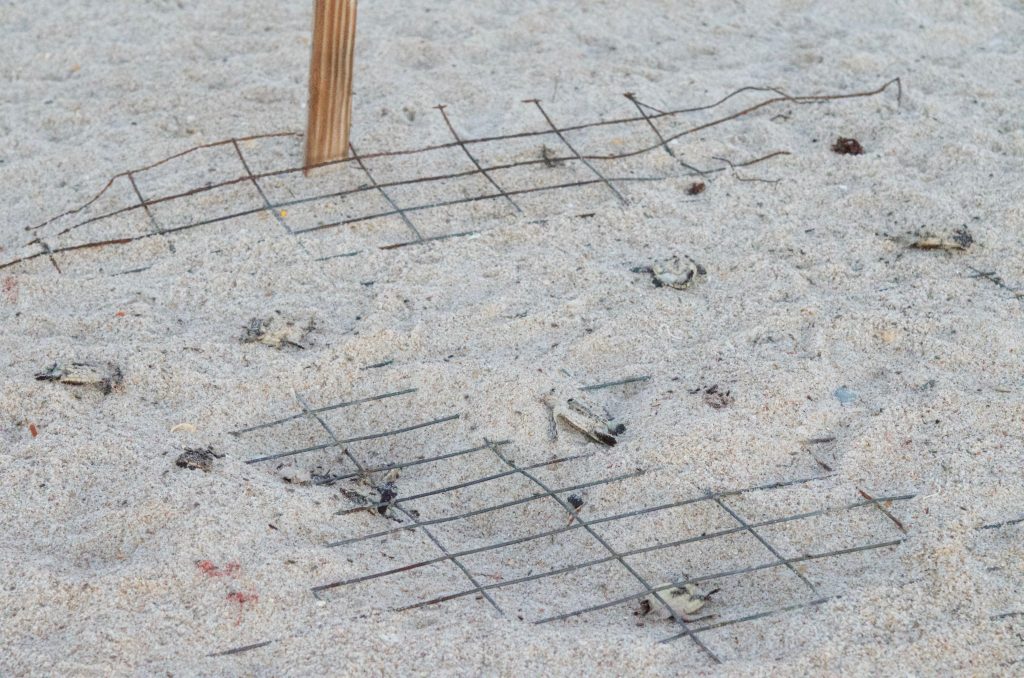 Complete Devastation- Dead Hatchlings litter the ground surrounded by raccoon tracks. Some had been decapitated while others were just bitten through their plastron.

As a Reproductive Physiologist, Sea turtles have always held a fascination for me. Their reproductive biology is different from what I have studied in the past with elephants or snakes. Their grace and beauty underwater is a sight to behold, leading to their image becoming synonymous with the free spirit of the ocean. As we all live on this planet, it is the responsibility for each and every one of us to make good choices to help protect our wildlife and the wild places they call home. There is so much we don’t yet know about these amazing creatures. With any luck, the next few years will allow me some insight into this mysterious world.